Last month, we launched a letter writing campaign dedicated towards Mr Syed Suhail, a man on death row in Singapore, with the hopes of ameliorating the sense of isolation and dehumanisation that death row inmates typically experience in their final days. We were told by his family that Mr Syed enjoys receiving and reading letters, and hope that this letter-writing campaign will serve as a source of comfort for him in the bleak days to come.

We are delighted by the overwhelming amount of response we have received thus far and are excited to collate them all within this blog post for your perusal !

Letter from an 8 year old

I’m sorry that I am writing on the computer. My hand writing is practically illegible!

I’m writing to you from Helsinki, Finland, in the north of Europe. My 18 year old cat, Moby, aka The Joo Chiat Gangster from Singapore is with me on the sofa.  It is  6th March its minus 10 degrees outside and it is snowing and the sea has frozen into ice as far as the eye can see.

I have a student Anna, who is currently in Russia and she spoke the other day about imagining she could walk from St Petersburg over the ice to Helsinki. For me, I imagine that the ice is frozen all the way to Singapore and that I could walk there and stand outside Changi prison with so many others who care about you and your case.

I want you to know that your story has travelled this far thanks to the many in Singapore who care deeply about you and your family and who care enough to want to fight against all odds to change the barbaric, colonial system you are being put through.

I read your sister Sharifah’s stories about you. And I watched a video interview with your sister Sharmila. It’s so clear how much both of them love and respect you. Your sisters are so very wise, perceptive, so able to understand the complexities of where and how things happened the way they did for you.

They told us about your loss of your Mother and your Father.

I only wish the Singapore legal system had half of this wisdom and compassion of your sisters.

Something Sharifah said rang so true to me:

“All of us have our own skeletons in the closet. Our own silent addictions, coping mechanisms.”

I dearly wish that your story and the stories of those like you would finally give Singaporeans in power the courage to transform their legal system from a colonial relic to a visionary, ground breaking model of justice that moves beyond kneejerk, punitive reactions.

I think of those Singaporeans in power and high up the judiciary (some of whom I have met personally). I think of them enjoying a cigarette or a cup of coffee or one too many glasses of beer or whisky or wine or whatever they do after a day of stress and/or loneliness and/or alienation. I think of them on one of those days when they feel lost, and when they try to re-tell  themselves that story about how they are only staying in the system, only working within the machine in order to make things better from the inside or to make good a promise to their lost Father or their lost Mother or their estranged partner or their children; a promise to try and change things and to make things better.

I dearly wish how, after that second or third glass or cigarette they take in, that they might come to realize, in your sister’s words, how similar we all are in our fragilities and our coping mechanisms.

I wish that Singapore might finally have the courage and maturity to use the crazy wealth that it accumulated to imagine and create a society with values based upon empathy, care and relationships as much as competition and individualism. I wish that Singapore might be able to celebrate the collective values that already exist in its population; values that are demonstrated by your sisters; values have the capacity to transform the cold individualistic machine into something nurturing; something in common.

Sharmila tells me you have read philosophy and poetry. How you wrote articles.  How you would also goof around and make people laugh. I imagine how you might write a story that is poetic and philosophical and perhaps also funny; a story that might perhaps might just finally melt the ice in the hearts of those in power. And I imagine that when reading your story, they might also recognize in it their own alienation and loneliness. I imagine they might perhaps realize that a reason they want to push you away, to lock you away into this dark corner, a reason they want to do violence to your body and to those like you, has as much to do with an inability to find compassionate, collective ways to respond to their own pain and feelings of abandonment, as it has to do with any threat you personally might be to Singapore society at large.

My cat 18 years old, from Joo Chiat is purring beside me. I so wish you could hear him purr!
He purrs in another space and time from humans. It is a sound that heals both his ageing asthmatic body, and my own.

I pray that things will get better for you. I wish you great, great courage. This is a courage I do not know, as I have never ever been tested in the way that you are now. I wish you the healing sound of a cat that purrs. I want you to know that we know your name, Syed. I want you to know that the very wise words of your sisters Sharmila and Sharifah have touched many, that we think of you and that you are deeply cared about.

With gratitude and respect

It all began with one seed,
a singularity breaking through.
Budding with nary a care,
nourished by self-less nurture.
After many sunrises,
the seedling grew into a sapling.
Leavening with hope,
it reached for the resplendent.
Brimming with a callow green,
it weathered through fallow seasons.
A grown tree, it shed with sadness,
a fragile aliveness trying only to survive.
Hiding in its own shadow,
it sought refuge against harsh winds.
An existential contrast, the tree and I,
between ever and never.
Never wrecked by the winds,
how blessed I am.
As I count my blessings every day,
others can count on me.
Life took away their freedom,
comfort is all I can give.
Sending over solace of a caring hand,
I am rooting for the lonely tree.

We might not know each other,
but I’m rooting for you.

(Sorry for not writing this by hand. I can’t write anymore after my stroke.)

I got to hear about your death sentence, from other users of the Internet. 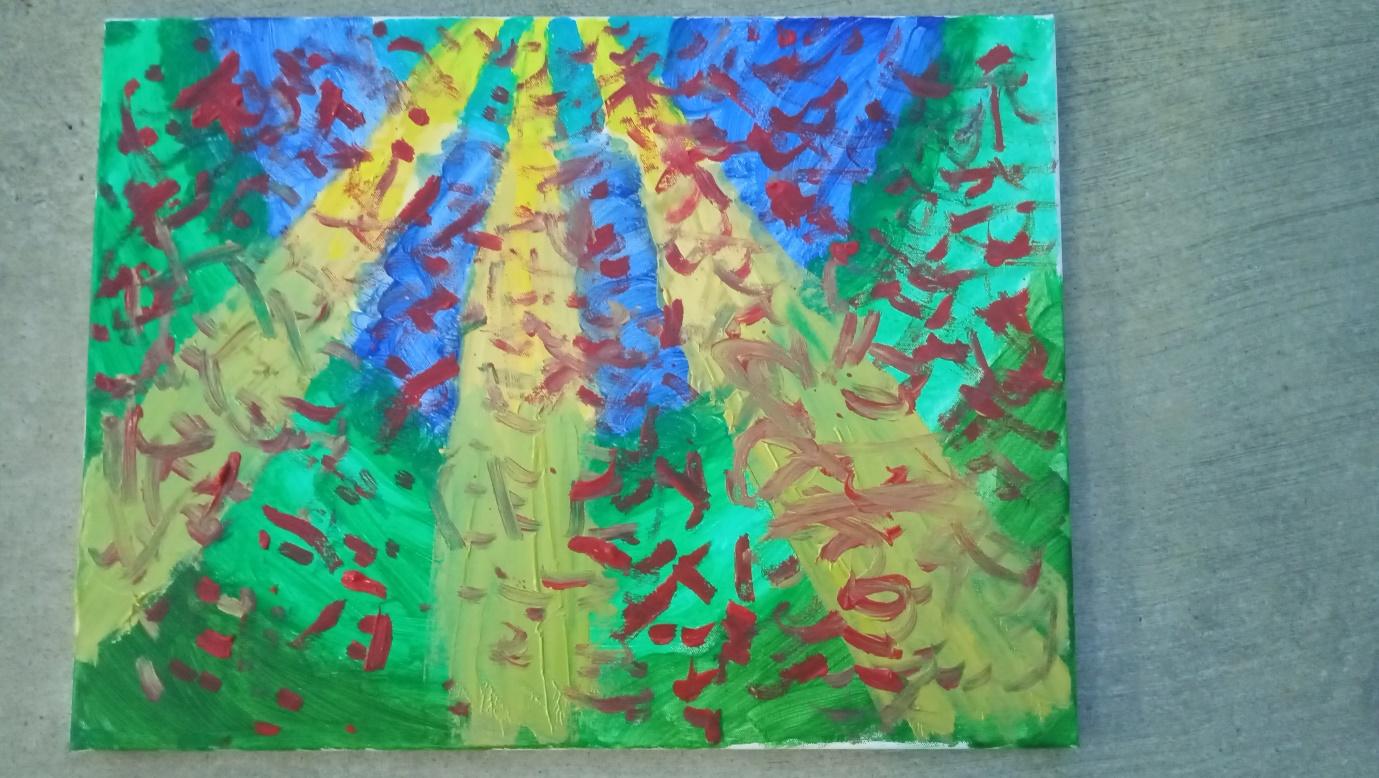 What’s your favourite story, fictional or otherwise? I liked this book called “Bridge to Terabithia”. It’s about a young boy who found a good friend. They created an imaginary world where they were king and queen. But that good friend died. What happened to that young boy? He was sad. It took a long time, but he later invited his (younger) sister to the forest where his good friend and himself have been meeting to become king and queen. It is an ending for his good friend, but a beginning for his younger sister.

This painting is what I imagine Terabithia to be like.

What kind of world would you like to live in, Syed? Is this world enough for you?

I’ve been disappointed many times by this world and the people in it, Syed. So I find it helpful to have a religion (Christianity), and a after-life to look forward to. (Heaven, Hell and so on).

Do you know the prophets Isa and Muhammed, in the Quran? (Peace be upon them). They suffered very much, in this world. But God rewarded them for enduring to the end, even enduring to the point of death.

Do you believe in God and the Here-after – or the After-life – Syed?

Anyway, I thought of you today. And I believe my god is not unaware of you – and your situation – as well.

I wish you peace of mind. If you find it helpful, please think of a place you have enjoyed. Imagine its sounds – what do you hear? – and its sights – it is just around the corner, what do you see?

You don’t have to tell me, you just have to picture it in your mind.

Now you are there. Your favourite place. Breathe in, breathe out.

You can do this imagining exercise whenever you are ready, Syed. As many times as you like. Hope it helps you.

(I learnt it from someone who helps people with cancer, feel better. The cancer is terminal. That means those people are going to die of cancer.)